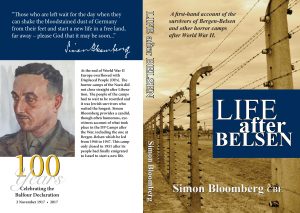 At the end of World War II Europe overflowed with Displaced People (DPs). The horror camps of the Nazis did not close straight after Liberation. The people of the camps had to wait to be resettled and it was Jewish survivors who waited the longest.

Simon Bloomberg provides a candid, though often humorous, eye-witness account of what took place in the DP Camps after the War, including the one at Bergen-Belsen that he led from 1946 to 1947. This camp only closed in 1951 after its people had finally emigrated to Israel to start a new life.

Read the Foreword to the book by Simon’s last surviving child, Eva Spiers, now in her eighties, she recalls memories of her father who she describes as ‘An unsung hero’.

Read a sample chapter – My Own People which shares Simon’s impressions of the first Jewish survivors of the Holocaust which he encountered and how he felt like Joseph giving food to his brothers.

Find out how Life After Belsen came to be published and About The Editor of the book,  Al Gibson.

Read Reviews from people who have read the book and leave your own review to share with others. If you are an Amazon customer please include your review on Amazon.

Mark the Balfour Centenary with your copy of this new Holocaust-related book. Click to order. 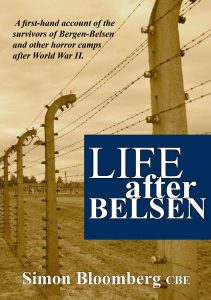